The Blind Prophet tells the story of Bartholomeus, an apostle who is in charge of freeing the city of Rotbork from all the corruption and evil that coexist in it. The game is a point & click adventure with a very adult look and the story is told in a comic book format. The art design is very detailed and it’s easy to stop and stare at the scenery and appreciate all its incredible details. The color palette is very neon and considering that the game takes place during the night, then this visual has an even greater impact.

There are several types of puzzles and most are easy to solve. In most cases, they always offer a different challenge from the previous one, never making the task boring. Some of them require accuracy, calculations, or memory work. One of them forced me to play a piano staff, which left me surprised and quite satisfied after I managed to overcome the challenge. Puzzles are clearly one of the best aspects of the game for their creativity. 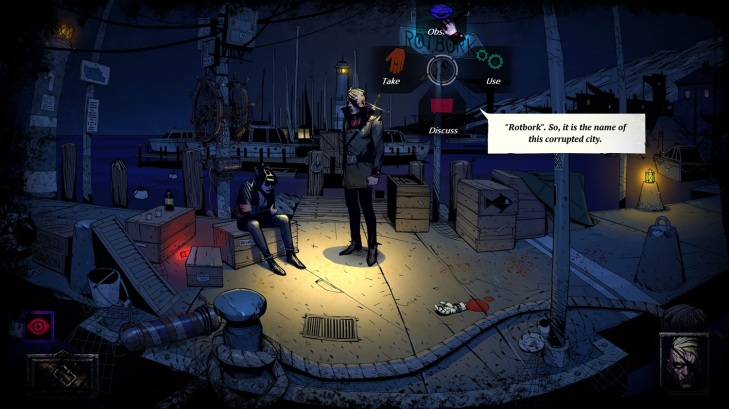 The various areas of the city unlock with progress and, as usual in this kind of game, prepare to move back and forth several times. The possible locations to interact in the scenery are identified with red dots and there are always four options at our disposal for each one, as you can see in the picture above.

The sense of humor is something present in the dialogues and, quite honestly, I was able to see Geralt de Rivia in Bartholomeus. Not only because of his similar appearance (in my opinion), but also because of his way of being in the dialogues. Unfortunately, the characters have no voices, apart from some “sounds” from time to time. It would have been interesting to see a work in this field, although I also understand the lack of it because the project came from a crowdfunding on Kickstarter. In what concerns the soundtrack, I liked it a lot with focus on synthwave.

The game always performed well, but I had a problem with the save. When I tried to get in for the second time, the game didn’t recognize the save and started like it was the first time. However, the producer quickly provided a solution to the problem and allowed me to choose where I was previously. It was an isolated case, as it never happened again in the following days. In terms of game length, we may be talking between 5 and 7 hours, depending of course on how much you explore or how long it takes to solve some puzzles.

Overall, The Blind Prophet is a very good game. The story’s not bad, like its ending, but it ends up leaving me a little disappointed. I feel like I’ve never had that surprise moment or anything that would leave me speechless. However, its look, soundtrack and gameplay, end up easily compensating for the whole experience. If you’re a point & click fan, then you can’t ignore this game.

Personality of the main character

Good story, but could have gone a lot further

Problem with save (one time only)