Dragon Ball is a franchise over 30 years old. Among the original work in sleeve, adaptations for anime and many video games, there are many products associated with this name so well known worldwide. One thing is certain, the success of Dragon Ball will not fade anytime soon because the possibilities are immense. When it comes to video games, the latest entry is Dragon Ball Z: Kakarot, a game with RPG elements which tells, once again, the story of Dragon Ball Z.

Of the series that exist, Z is probably the best known and most successful. The Japanese studio CyberConnect2 was the company responsible for the game’s development. The same studio in charge of Naruto’s latest games, and those who played them and followed the series, know that their adaptations were successful. The same goes for DBZ: Kakarot, where various moments in the series are faithfully represented in the game, including some dialogues. From Raditz to Majin Buu, none of the main villains were left out of this adaptation and even moments like the episode where Son Goku and Piccolo getting their driver’s licence, are present in this title. 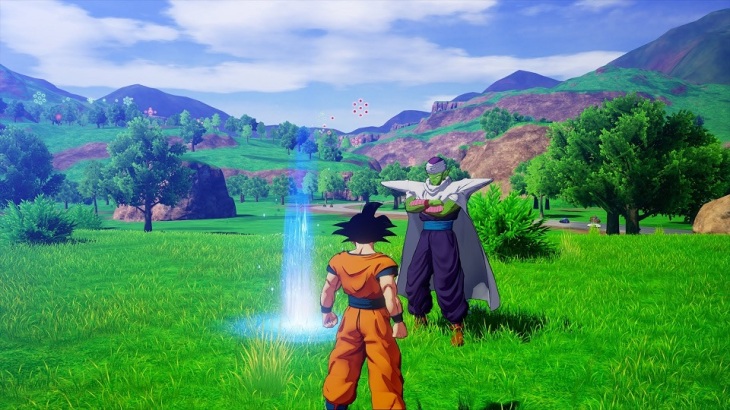 As I mentioned before, this game has several RPG elements and allows different types of customizations. It is possible to evolve the various playable characters in terms of skills and tricks, but not all the famous moves are available initially, as they follow the progress just like in the original story. As an example, Son Goku can only become Super Saiyan during Namek’s episode in the fight against Frieza.

The characters evolution is made by obtaining Z-Orbs. These can be obtained by completing main and secondary quests, but are also scattered across the map. During the first few hours of the game it’s fun to pick them up, but quickly they begin to lose their brilliance. Thankfully, as time goes on, we’ll easily start getting lots of Z-Orbs as the story progresses, and there’s little to worry about getting out of your way to get more. Not to mention you can get a lot by using the 7 Dragon Balls, but we’ll get to that later on.

Training is another way to get new tricks or improve existing ones. There are several training zones scattered around the various points on the map, so at any time you can dedicate yourself to learning new skills. Note that each character is entitled to their own training and tricks and each has to be individually evolved in that regard.

As we all know, Dragon Ball’s characters have always eaten a lot and the food has some importance in the game. It’s possible to pick up several food items in the world so we can create specific dishes. These will give lifetime advantages and temporary boosts. For more general effect, you can talk to Son Goku’s wife about cooking specific dishes, which require certain ingredients that are harder to find. It is still possible to fish and hunt, although these activities do not offer anything extraordinary as a reward.

Obviously, combat plays a pivotal role in the game. Contrary to what the videos may seem, it’s quite easy to control the character in combat. The rhythm of the combats is quite frantic, especially when special blows are executed one after the other. We can have up to four active special moves ready to be used, as long as Ki’s bar allows it. Once its empty, you have to fill it up while trying to dodge enemy attacks.

The combat is quite simple, although the first moments can pass the feeling of the opposite. In general, enemies are quite accessible to defeat, although there are some bosses that can do a bit more work, especially those that absorb the energy of our special attacks and fill their life bar to the fullest again.

In some battles, we’ll have the support of one or two characters, which makes the war zone even more chaotic but fun. It’s always exciting to ask your buddies to execute a special attack at the same time as ours, resulting in a real power frenzy everywhere. 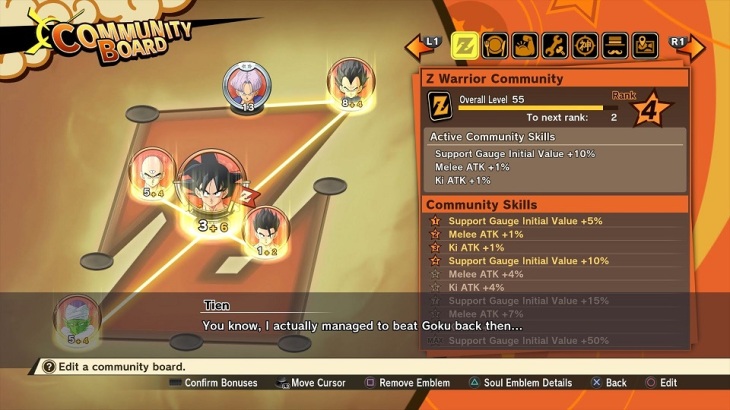 As we progress through the story or complete various side quests, we’re gaining Soul Emblems from various characters. These can be applied to various boards with a focus on combat, food, training, among other options. As you can see in the top picture, the stronger the relationship between the various characters, the higher the community level and, consequently, the effectiveness in terms of final results.

This mechanic offers some customization. It’s almost like a skill tree, where we decide which aspects to improve. However, if a Soul Emblem is being used in one community, it can not be placed in another. Quite frankly, my focus was almost entirely on the combat part and I never felt like I was missing anything by not paying much attention to other communities.

It’s an interesting mechanic, but I think it could have had more depth, as it ends up going a bit sideways in the game without us missing it.

It should be noted that we can improve the level of Soul Emblems by “offering” certain specific items. The higher their level, the better the end result in terms of advantages. 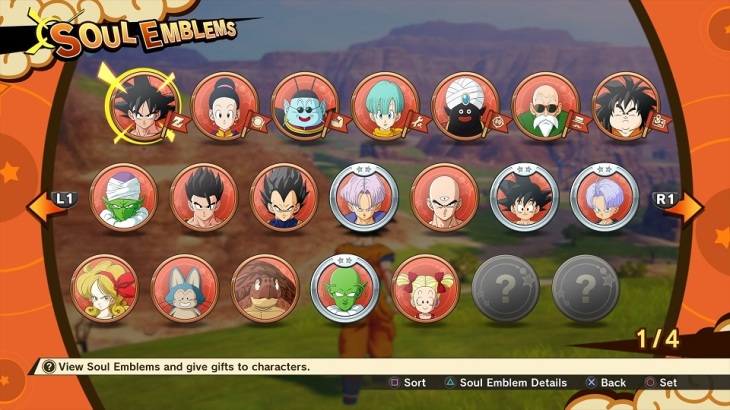 There are several characters we can control. Son Goku, Son Gohan, Vegeta, Piccolo, Future Trunks, Gotenks and Vegito. It may not seem like many but, in my opinion, they are enough. As for the supporting characters, the list is longer, and there are a few names like some of those I mentioned, but also Krillin, Tien Shinhan, Chiaotzu, Yamcha and a few more.

When ti comes to other well known characters of the series, you will find many of them as NPC’s providing some side quests. Bulma, Launch, Android 16, Videl, Seer Baba, Supreme Kai, are just some of the names you will find, outside the main narrative.

As expected, the Dragon Balls are present in the game. However, they only unlock after the Namek saga. Every twenty minutes, they become available to be found and allow you to order such Z-Orbs, rare items, money and the possibility to repeat the battle against previous bosses or certain special enemies. It turns out to be an important mechanic to help in several aspects and it’s always fun to walk through the different maps looking for them. If you want easy money or Z-Orbs, then this is a good way to get them. 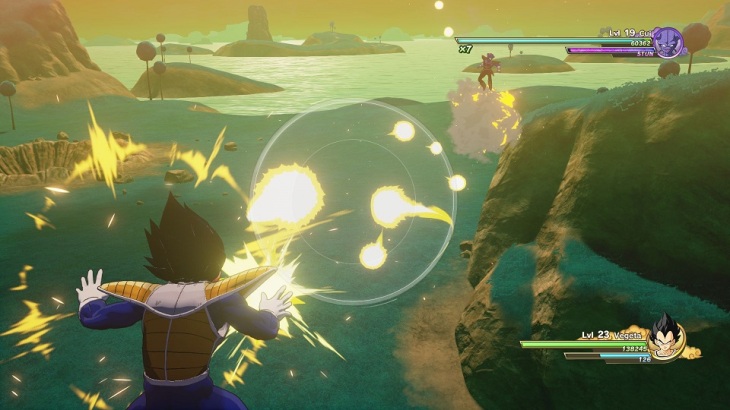 The world of DBZ Kakarot

Although this is not a full open world, the various areas are large enough not to appear “closed”. The areas will unlock with the progress in the main story and you will find some of the most charismatic places in the series. Some of them are the home of Master Roshi, the city where the house of Bulma is located or even the place where it takes place the martial arts tournament, not forgetting the tower of Master Karin.

Visually, the game does not surprise anyone but it its the faithful representation of the world of Akira Toriyama that makes the areas so pleasant to explore and enjoy. The textures in certain places are quite low, but we are talking more about areas out in the field, outside the most crowded areas.

One of the things I liked most about Dragon Ball Z: Kakarot was its so charismatic soundtrack that accompanied us during so many episodes. Whether during exploration or cutscenes, it’s impossible not to recognize all the songs that are playing in the game all time and make all these moments even more special. For everyone that might prefer the Japanese dub, this one is present in all its glory. 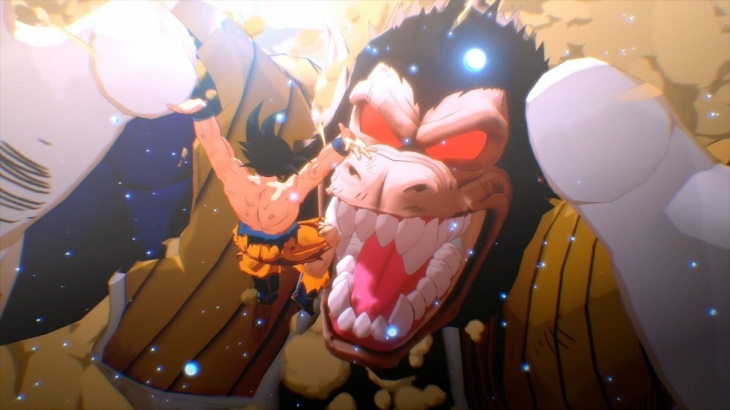 But not everything is perfect

The main aspect of Dragon Ball Z: Kakarot is the recreation of the story in the game and the excellent way it was made. But beyond that, there are some simple and repetitive side quests. In terms of activities, you can fish or hunt, create food dishes or some vehicles for Bulma, but all in a very straight forward way. The systems are very simple, not offering any kind of challenge.

The loadings are somewhat time consuming and this starts to bother after a few hours of gameplay. Let’s hope that the next patches can shorten the duration of these painful moments. Unfortunately, the game has crashed twice on Playstation 4 but, fortunately, the auto-save saved me from losing several hours of game.

The game also has some audio problems with the sound effects not starting when it should. Another audio situation its about some characters constantly repeating certain expressions when in combat or during exploration and it turns out to be a bit repetitive.

Dragon Ball Z: Kakarot is clearly a game for fans of Akira Toriyama series. Compared to other RPGs, it is a game that offers nothing new. However, it’s delightful to live in this world and if you’re looking for the most faithful representation of Dragon Ball Z story in video games, then this is the best offer available. Despite some less positive points here and there, I strongly advise this game to all fans of the saga.

The game with the best representation of Dragon Ball Z story

The recreation of some iconic places in the game

A lot of well-known characters not only from the Z series, but also from the first