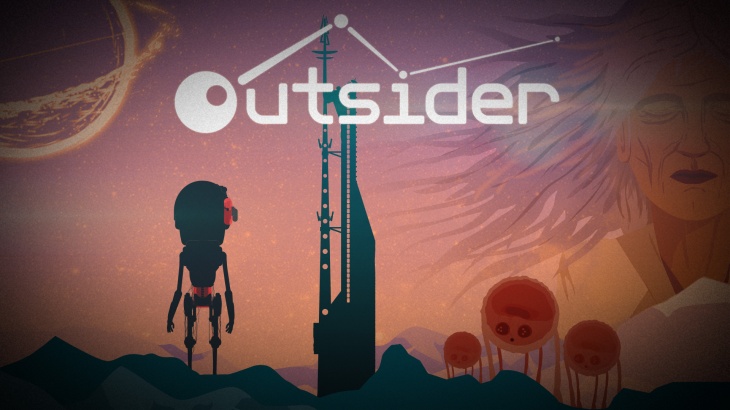 Disclaimer: This interview was published in March 2019 in Portuguese, but now it’s also available in English.

It was during Lisboa Games Week of 2018 that I had the opportunity to talk a bit with Ricardo Moura, one of the developers of Outsider from the studio Once a Bird. I hope you all enjoy the interview and get to know a new game.

Can you talk a little bit about Once a Bird and how many people the studio is formed by and their tasks?

Once A Bird consists of three people: I (Ricardo) am a programmer and game designer, Tiago is the conceptual artist and illustrator and João Nuno does the music.

I understand this isn’t exactly the first game in the studio or at least the first one in which everyone is involved, right?

Right, but it’s the first game the three of us are involved in. The first more serious game we did was called Bennu, it was for PC and XBox 360. At that time it was just me and João Nuno. At that stage we also made Graveyard Shift (which was never released) and Ford later on. Both Bennu and Graveyard Shift were in the Top 20 of Microsoft’s DreamBuildPlay contest. Even later Tiago did the illustrations of Suit Suit Go but in this game we didn’t use original music. The last game before Outsider was Fold+, an improved version of Fold where I worked alone. It was chosen as one of the best games of the week by Apple, but unfortunately Bulkypix, that published the game, went bankrupt.

Right now, you are working on Outsider. What are the main sources of inspiration?

Outsider was inspired by several games and books. The main inspiration in terms of design is Myst, whose design at the time was revolutionary in contradicting the established patterns of graphic adventures, where the puzzles consisted of finding the right object to use with another object. In Myst the puzzles are independent, there is no inventory of objects and descriptions and dialogues are also avoided. The Room game series was another inspiration for the game design. Other inspirations include the more classic graphic adventures The Dig and Loom, both by Lucasarts, the book A Brief History of Time, by Stephen Hawking, and the story The Last Question by Isaac Asimov.

Can you explain a little about what Outsider is? Its theme, gameplay, etc.

Outsider is a graphic adventure in which each puzzle is independent and completely different from the previous ones. Once a mechanic is explored, it never appears in the game again. The gameplay consists of understanding the mechanics of each puzzle and solving them through logic. The story follows an android that, by accident, manages to repair itself hundreds of years after the extinction of humanity and realizes that it has to escape the end of the universe itself. To keep the player immersed in the game, the story is told implicitly, with each puzzle advancing the story but showing just enough for each to draw their own conclusions.

Some games change a lot from their initial project to the final result. Although Outsider still has a few months to be in the oven, how has the evolution been in this regard?

In the first version of Outsider I was the one who made the graphics. What follows is an image of the original look of Outsider and may hurt the eyes of some readers:

This version was approved by Microsoft for publication in Xbox One and it was then that I invited Tiago to do the graphics. All the graphics of the game are vector, to allow transitions between scenes without cuts. During the production of the game we keep evolving the look continuously. The image below shows the progress in the last year:

How has the public reaction been in the events where the game has been present?

The reaction has been very good. Of course no game pleases all tastes and we’ve been making demos shorter and shorter because in events, the audience feels they have a limited time to try each game, but we were still glad that there were a lot of people who got stuck from start to finish, even when we had a version of the game that took half an hour to complete.

According to your page, the game will come out for PC and Xbox One correctly? Any expected date?

Correct. We don’t have an official date yet, but we hope to finish development this year, we’re in the final part.

As far as I know, publishing games on consoles is more demanding in terms of “paperwork”, or requirements, than for PC. Is it that demanding? What are the differences with the PC?

Although we haven’t passed through that “sieve” yet, since it’s the first game we release in the ID@XBox program (which is more demanding than the Xbox 360 Indies games program) Microsoft recommends two months only for the certification process, which implies that the quality control is more demanding than in Steam, where it’s possible in a few days to complete the steps to release a game. Among other things, Microsoft requires the game to be translated into several languages (besides English and Portuguese) for launch in the European market.

Are there any ideas for the next project yet? If so, can you reveal something or is it still a secret from the gods?

There are many ideas but nothing concrete yet. What I can say is that we never made a project similar to the previous one. 😉 For now we’ll release a version of Fold for Steam at the end of the month, with improved graphics and interface: Now a little more on a personal level, what is each of you playing right tnow?

Recently I finished the Shadow of the Colossus, now I’m playing Axiom Verge and Ori and the Blind Forest. I also play too much Paladins and FIFA.

To finish, I ask you to leave the links where the public can find you in the differnt social networks and websites. Good luck to Outsider!